1000 BEATS is a weekend dedicated to the world of percussion and drums, an open-air school with a programme full of events. Sponsored by the Royal Conservatory of Music in Copenaghen and the Conservatorio “Alessandro Scarlatti” in Palermo, it is aimed at students and professionals of all the conservatories and music schools in Europe. Its mission is ambitious: to bring together percussionists and drummers for a multicultural exchange, not only from an educational point of view but also from a social one.

4 sessions in English held by world famous artists, 4 days of workshops and rehearsals, 4 exclusive event. You can ask for private lessons to the teacher and interact with them closely for a unique educational experience. You will also have the opportunity to be updated on the latest news about instruments, thanks to a number of technical sponsors who will be present.

Thousand surprises, one destination: Palermo, Italy and its cultural heritage in Downtown, sea promenade, historic markets, good wine and healthy food. All within a walking distance. Such a wonder.

Thousand emotions for everyone during the concerts event at venues not usual for cultural performances: harbour, airport  and suburbs.

One destination, Thousand beats. Youngsters from thousands cities as migrants toward an island in the middle of human flow from the Mediterranean Sea. The percussion ensemble together with the multicolour people of “Ballarò” and “Vucciria” neighbourhoods.

He graduated in percussion instruments under the guidance of maestro Franco Campioni at the Giuseppe Verdi Conservatory in Milan, where he also studied composition and obtained his piano diploma. Specialized in vibraphone with David Friedman, as a soloist he played with the Orchestra Angelicum in Milan, the Orchestra del Conservatorio Superiore di Graz, R.A.I. Milan, the Orchestra Sinfonica in San Remo e the Orchestra d’Archi Italiana, i Virtuosi Italiani and Novosibirsk Simphony Orchestra. As a chamber musician he has performed in the most prestigious Italian companies such as the Società del Quartetto, Società dei Concerti di Milano, Unione Musicale di Torino, Accademia di Santa Cecilia, Amici della Musica di Perugia and Firenze, Accademia Chigiana, Teatro alla Scala etc… Collaborations with prestigious artists such as A. Ugorski, M. Brunello, A. Lucchesini, Markus Stockhausen, P. De Maria, E. Fisk, G. Carmignola, G. Sollima, E. Morricone. He is a permanent member of the group “Sentieri Selvaggi” directed by the composer Carlo Boccadoro who also dedicated his compositions to him. In addition to his career as a classical musician, he carries out an intense activity as a jazz vibraphone player, playing and recording with numerous internationally renowned artists such as P. Fresu, E. Rava, D. Moroni, F. Dicastri, G. Trovesi, G. Coscia, M. Negri, G. Gaslini, F. Ambrosetti L. Schneider, D. Liebman, A. Nussbaum, S. Swallow, Tom Harrell, P. Favre, D. Friedman, P. McCandless, M. Mainieri, B. Elgart, and performing in important festivals such as Umbria Jazz and Roccella Jonica. He has toured the United States, Mexico, Africa and the Far East. He has numerous recordings to his credit for the Splash, Egea and Abeat labels, and has recorded in duo with Luca Gusella, for the American label Obliqsound. Recently he was invited by Piero Angela in the broadcast “Super Quark” a program broadcasted at Italian national TV. He teaches percussion instruments at the G. Verdi Conservatory in Milan and vibraphone and improvisation at the Milan Academy of Sound.

The Russian-Greek percussionist Theodor Milkov is one of the most innovative marimba players. Well known for his “pianistic” approach, revolutionary ideas and technical abilities, bringing the marimba to a new level of performance. Milkov’s repertoire includes music written for harpsichord, piano, from baroque to romantic epoch as well as contemporary music. Through collaboration with the composer Ruud Wiener, Milkov has created new Marimba repertoire, as well as an educational series of Marimba études under the title “Fluent Movements for Marimba” Commissioning new music has been an important aspect of Milkov’s artistic life. That is how “Passacaglia” is born; a massive, weighty, tonally contrapuntal, and technically brilliant tour de force, written by Raymond Helble for his 2016 PASIC debut. Milkov’s ability to perform classical repertoire on Marimba, have opened him doors to prestigious festivals such as Oranjewoud Festival – The Netherlands , Bach Academy Brugge – Belgium. Theodor Milkov has been giving masterclasses in musical institutions all over the world, such as HfM Muenster (Germany), Colburn School of Music Los Angeles (USA), Northwestern University (USA), Conservatorium van Amsterdam (the Netherlands), Conservatoire Saint- Maur-des-Fossés (France), Salerno Conservatory (Italy), Terni Conservatory (Italy), Taiwan, Music Conservatory Kraków (Poland) Milkov began his percussion studies at the age of 7, in Municipal Conservatory of Patras (Greece), under his stepfather Maxim Mankovski. Later on, over the period 2002-2009, he continued his studies in Musikhochschule Detmold (Germany), Royal Conservatoire Den Haag and Conservatorium Van Amsterdam ( The Netherlands) under Profs. Peter Prommel, Hans Zanderoep, Fedor Teunisse, Luuk Nagdegaal, Nick Woud and Gustavo Gimmeno. Milkov holds a Bachelor of Music from Detmold Musikhochschule (Germany) and Conservatorium Amsterdam ( The Netherlands). Masters of Music from Royal Conservatoire Den Haag (The Netherlands) and Konzertexamen from Detmold Musikhochschule (Germany). 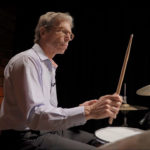 John is the author of The Art of Bop Drumming, currently published in five languages, Beyond Bop Drumming, The Jazz Drummer’s Workshop and the DVD The Master Drummer.
John has a BM in Jazz Studies from the University of North Texas, 1975, and an MM in Jazz Studies from the Manhattan School of Music, 1985. He is on the faculty of Manhattan School of Music and Kutztown University, an Artist in Residence at the Amsterdam Conservatory in Holland and has given master classes around the world.